One of the reasons I decided to have a blog was so that I could openly share my struggles and that of other women who I know or come across as I live my life’s journey.  One thing I always seek to do is be honest with myself and where I am in my journey.

One thing that I believe I have become very good at and I now pride myself on, is being self-aware; sometimes too self-aware.  Recently I have began to really access and examine how I’m feeling in any give moment.  I find that when I do that I am better able to take action without having an irrational reaction to my situation.  During one of my self examinations I realised how much I really struggle with NOT knowing.  I hate lack of communication from others which would greatly help with my anxiety, I hate not knowing how things are going to work out (although I’m confident they will), I simply just hate not knowing.  I bet as you’re reading this you’re thing ‘gosh woman, what a control freak.’ There is probably an element of truth in that, however, for the most part I am totally fine and happy to not be in control in the doing as long as I know what is happening. I know, weird and possibly contradictory but that’s how I feel and it makes sense to me lol.

I’m being very vulnerable here and I’m sharing something that I probably would never admit, especially as Christian and that is deep down I lack faith. I know how to act like I have it and the relevant actions I need take to make it look like I have faith, but according to my own self assessment I don’t.  The Bibles definition of faith in Hebrews 11 is true and as a Christian this is the ultimate truth of what faith is.  I’m not sure if this is the same thing or if the two are connected, but in regards to uncertainty this quote by theologian, Richard Roar perfectly articulates what I am trying to say:

“My scientist friends have come up with things like principles of uncertainty and dark holes.  They are willing to live inside imagined hypothesis and theories but many religious folks insist on answers that are always true.  We love closure, resolution and clarity while thinking we are people of faith; how very strange that the word faith has come to mean its exact opposite.”

“You will only get disappointed,”“it’s a waste of time,”“no one has ever done that,”“that is not realistic,”“you don’t have the skills or qualification,”“stick to what you’re good at,” and “that’s too risky.”

How many of you have heard these comments from friends, family members or complete strangers?  Or instead of verbalising it their lack of support, encouragement or interest in what you’re doing pretty much says the same thing. If someone you know has said this to you, I’m sorry to say they are probably absolutely right! Every single one of those statements is true and is likely to be true about you or your journey to your dream IF you choose to believe and accept them.  These truths do not need to be absolute, they can be changed. You have the power and control to alter these truths and make them the biggest lie.

I always remember the story of Joseph, the young naive boy with a big mouth. Some of you might be familiar with the story but for those of you who aren’t here is a brief synopsis.  God gave Joseph a number of dreams about his future; Joseph decided to share these dreams with his older brothers. The problem was if Joseph’s dreams were real it would result in him becoming a great world leader and ruling over his brothers. His brothers were already profusely jealous of Joseph because of their father’s favouritism, so this only added salt to the wound. They were angry, couldn’t believe it was possible and called him a ‘dreamer.’  As far as they were concerned their little brother becoming a world leader was too big of a dream to have and they sold him into slavery and pretended he was dead. These were not strangers these were his brothers! At this point many people would say: “It’s probably best not to dream too big or maybe I’ll dream just enough so that if I do fail the fall when I hit the ground won’t be that painful.” Yes, you could do that, but let me finish the story. Joseph’s dreams came true.  However, he had to experience some very difficult times and years of isolation before his dreams became a reality.

This story always encourages me as I make plans, take action and share my dreams with people.  It’s not easy chasing your dreams when it seems like everything and everyone around you tells you (or secretly believes) it’s just not possible.  I am also encouraged by people like Helen Keller, Rosa Parkes, Diane Nyad (this video is an absolute must watch),

and so many other incredible women who decided to dream really big. And because they did, the whole world has benefited from their courage, persistence, discipline and strength.  These women and so many other amazing men and women refused to take their eyes of the goal.

I want to encourage all of you to dream the biggest, craziest outrageous dreams ever.  These past six months I have been on the wildest journey towards chasing my dreams.  I have been exposed to people and opportunities that have stirred my faith and hope to the point where I totally believe in myself and what I can achieve.  I have started to dream really big.  Am I scared that my dream is too big? Absolutely. Am I scared that it won’t work out? Sometimes. Am I scared about what people will think and the impact it will have? Yes.  However, in spite of those fears I am more excited at the thought of what if it does work? What it if I fulfil my dream? What if I am able to help people all over the world? What if one day someone says ‘because of you I believed I could and I did.’The dream is just part of it; the journey to the dream is incredible. When you know who you are and what you are called to do, nothing and no one can stop you from going for your dream. I choose to focus on the positives. I know that like the amazing women that have gone before me, if I keep God first, never quit and stay disciplined, it will just be a matter of time before my dream is my reality. 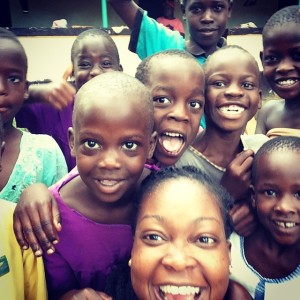 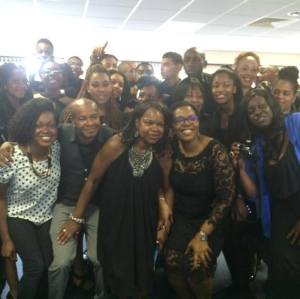 Go get that dream and enjoy the journey on the way!

Get your free ticket

A Researcher in Applied Theatre, Performance Studies and Drama Education

now a word or two
Cee and Chris